A review of Before the Dawn 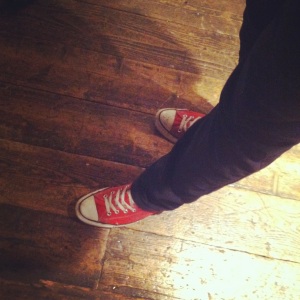 Two steps on the water. A barefoot Kate Bush leads a conga of musicians towards their instruments and up they start with a thunderous ‘Lily’, from her 1993 album The Red Shoes. This album, and the Powell & Pressburger film, were inspirations for our first themed issue of The Pickled Body. Live, ‘Lily’ is a muscular tune, the perfect song for Kate Bush to display her unique voice, richer now than ever. When she asks us where we have been, there’s only one answer. We’ve been waiting.

Tonight is Tuesday, August 26th, 2014, the opening night of Before the Dawn, Kate Bush’s residency at the Hammersmith Apollo, the site of her last full concert in 1979. This performance is divided into acts, this first presentation of six songs serving as a warm-up. Kate Bush is her own support artist, for who else would do? Rumour has it that David Bowie is in the audience but if he is, he stays offstage. There’s room for only one grand dame of pop here tonight.

‘Lily’ is followed by a raggedy ‘Hounds of Love’ that gives me my second ‘pinch-myself’ moment of the night – the first is being here at all. It’s an excellent performance of the song, naturally looser than on the album, and it brings back the full terror of being in love and pursued by doubt. ‘Joanni’ is next, one of those tracks on Aerial that sounded like it could have been from the Red Shoes sessions. After a hair-erecting ‘Running up that Hill’, in which we realise all over again what the lyric means – “see how deep the bullet lies” – this bodyswap fantasy of equality and discovery leads into ‘King of the Mountain’, another song that truly lives on stage. There’s something moving about hearing Kate Bush live, singing about Elvis playing in the snow with Rosebud, a riposte to her critics who’ve often had her down as some kind of Miss Havisham when all the while she was living a normal life, creating the conditions for her to be extraordinary in the work.

Before the Dawn is a theatre experience as much as it is a rock gig, and is co-directed with Adrian Noble. The programme notes make it clear that at first Kate Bush was wary of engaging him – what if he wasn’t receptive to her ideas? But it turns out he was, and there’s no doubt whose vision is in charge here. After an interval, the show takes on a wholly theatrical aspect. In a script written by David Mitchell the novelist, an astronomer listening to his radio picks up a distress signal and tries to convince the coastguard to do respond. This vignette leads in to a full staging of The Ninth Wave, in my opinion her greatest work to date, which is side two of Hounds of Love. Throughout this second act the effect of water is created by the use of sheets of fabric billowing across the stage. It’s powerful and handmade, and in its aesthetic very Kate Bush. The music is recreated perfectly but not exactly. From ‘little light, shining’ to ‘how much I love them’ is an odyssey of death and introspection – the life flashing before your eyes as the waves and the ice claim you, may not be your own. Kate Bush spent hours in a water tank at Pinewood to create the film projected here, the protagonist in a lifejacket, adrift on the waves. It’s an image replicated and expanded from the back cover of the album, and I expect it immediately connects the audience with whoever they were when first they heard this music. The theatre is wired for surround sound so that the voices from ‘Waking the Witch’, exhorting the sleeper to awake, place the audience at the centre of a momentary vocal tornado. A rig prowls over our heads as it shines its beam on the stage and creates the effect of a rescue helicopter searching for the drowning woman. By ‘Watching You Without Me’, half fromage, half genius, Kate emerges as a ghost haunting the house from which she has gone missing. There are plot holes but we let them pass. How long has the protagonist been gone? ‘Jig of Life’, with John Carder Bush on the screen of a half-submerged TV set as the narrator, tries to rouse the submarine dreamer and she stirs. Then a life-size buoy appears on stage to await her rescue and ‘Hello Earth’, possibly her greatest song, begins. The Hickox singers’ replication of the choral music from Herzog’s Nosferatu still haunts. The drowning woman makes it onto the buoy but the fish people try to drag her back under. In a stunning resolution, visually as well as musically, the fish people carry the protagonist from the stage and down into the audience. Has she been rescued, if not physically, in some way spiritually? As an epilogue, the band performs a warm, shuffling take on ‘The Morning Fog’, bringing us up from the depths and into the light.

Kate Bush’s son Bertie must not go unmentioned. It was he who inspired her to return to the stage. From the beginning of this show, he has been part of the backing chorus. In the third act, a performance of A Sky of Honey, Bertie takes the role of the painter in place of the now unavailable Rolf Harris. He also gets a new song to himself, ‘Tawny Moon’. A Sky of Honey is the story of a day from morning, through night, and on to morning again. Not much happens but it does so beautifully. The staging is simple and effective, using light and shade and apparently simple props,  to illuminate, rather than overpower, the music. An artist’s dummy stands in for the character of the little boy that Bertie once was – he is the ‘son’ referred to in the songs. As the painter, he now gets to tell his younger self to “piss off!” A massive picture frame in which the artist works, gives the setting its focus. The music here moves from gentle wakefulness to full-on ecstasy – and the closing moment, visually, is a dark and funny surprise involving wires and a giant crow’s wing, and Kate Bush herself, like some creature from Ted Hughes, for an emphatic, sudden, ending.

There have been standing ovations throughout the show and here now comes the longest. Some in the audience have clapped loudly along, and sang the words. A man a few rows further down from us was moved to stand up and dance in the style of the ‘Wuthering Heights’ video. He was quickly made to stop by staff.

‘Wuthering Heights’ is not performed, nor is anything before Hounds of Love. This is not a problem; what we’ve had has been wonderful. The tickets sold out in fifteen minutes but Kate Bush never did. This is one artist whose failures are always interesting, and whose successes are often sublime. The encore is definitely that as Kate returns, sits at the piano and offers a delicate reading of ‘Among Angels’ from 50 Words for Snow. The intimacy of this moment makes me wish for an entire show with just this singer and her piano and her songs. Wouldn’t ‘Moments of Pleasure’, ‘Under the Ivy’ and ‘The Empty Bullring’ sound wonderful in a hall such as this? That would be a whole different evening. After further rapturous applause, the band comes back for a rendition of ‘Cloudbusting’ that closes the show in suitably rousing form. As Kate and her musicians leave the stage, we know she’s not coming back, but what we have seen will stay with us. Before the Dawn is by any measure a triumph. Who knows what Kate Bush will do next – but you’ll want to be there.